I spent a month drawing in Kerala at the end of 2014 - drawing people working on the street and creating work for the Kochi Biennale. Each drawing is about a metre high and made on local coloured cotton.

The following is the text of the article Priya wrote and published in the Hindu on 12 December 2014 :-

Amidst the teeming milieu at the boat jetty in Fort Kochi sits Kumar, on the pavement, selling handmade combs. He heats ox horn, presses and chisels it into sharp-toothed combs. Ramesh squatting next to him mends shoes, darning split leather and sticking soles. On the roadside in Cherlai sits Usha Manoharan kneading dough, which she rolls out deftly into pappadoms. Madhu’s fingers move magically as he thrums the stretched leather of his tabla at the Kathakali Centre where at the ‘chutti’ session the slow application of make-up turns men into women. These are some of the daily chores done silently over the years by people who go unrecognised for their skill and craft. Passers-by watch them in their stride, a few curious about their profession. Artist Olivia Keith from England is more than curious. She is fascinated by their skill and handiwork and has painted these men and women in action. To her the works are a celebration of their skill, craft and a way of life that will soon be extinct.

“The whole process of drawing them is to respect what they are doing, because it is in real time. I am drawing at the same time as they are working,” says Olivia who decided to treat herself to a holiday in Kochi on her 60th birthday. Olivia calls her works, reportage, where she tries to record events accurately, “according to what I see.”

So as she walked the streets and lanes here she was more than just intrigued by people who are still working manually, with their hands. In England a broken shoe is never repaired but a new pair is just bought, she says reminiscing the times when her mother, now 88, would darn socks and sweaters at the elbows.

“I love mended things, this whole way of life. It is sad that we are losing this,” she says fearing that machines will replace handmade pappads and other products made manually.

Empathising with the process of making with hands Olivia chose to paint on hand-spun khadi fabric. She stretched the cloth over a canvas easel and has used charcoal, pastels and chalk for the drawings, working amidst noisy, hot and dusty surroundings. “I am focussed on the subject,” she says enthralled by their unique work and dedication. She has caught their mobility and emotions deftly. The speed and degree of movement of Madhu’s fingers on the tabla, or the muscular suppleness of Usha’s forearms are caught by Olivia skilfully, almost matching the craft of the artisan, her subject. As she works concomitantly with the subject in motion her challenge is one of unpredictability, something that she enjoys. I think sometimes art is so controlling. I don’t want to dominate,” she says adding that she continues to draw catching motion even if “rain comes and sun goes.” In a work she is drawing minutes, hours and days, she says defining it as “animated film in one frame.”

India she believes energises her differently. Back in England her drawings are in monochrome - black, white and red - but here colours find a way on to her canvas. “People here are expressive, open to talking about things, they have warm hearts. For me coming here is colourful.” 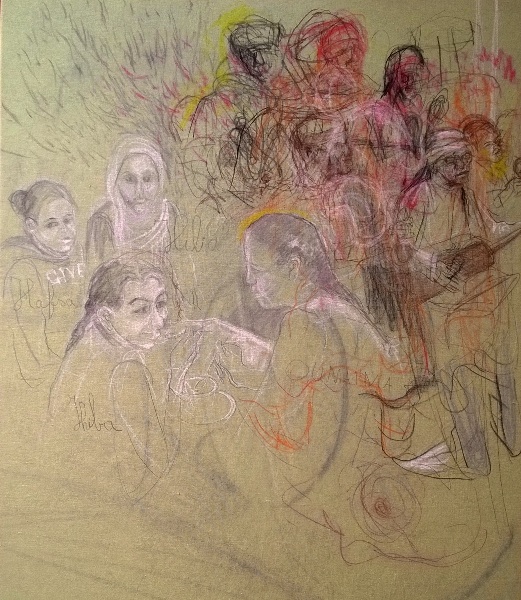